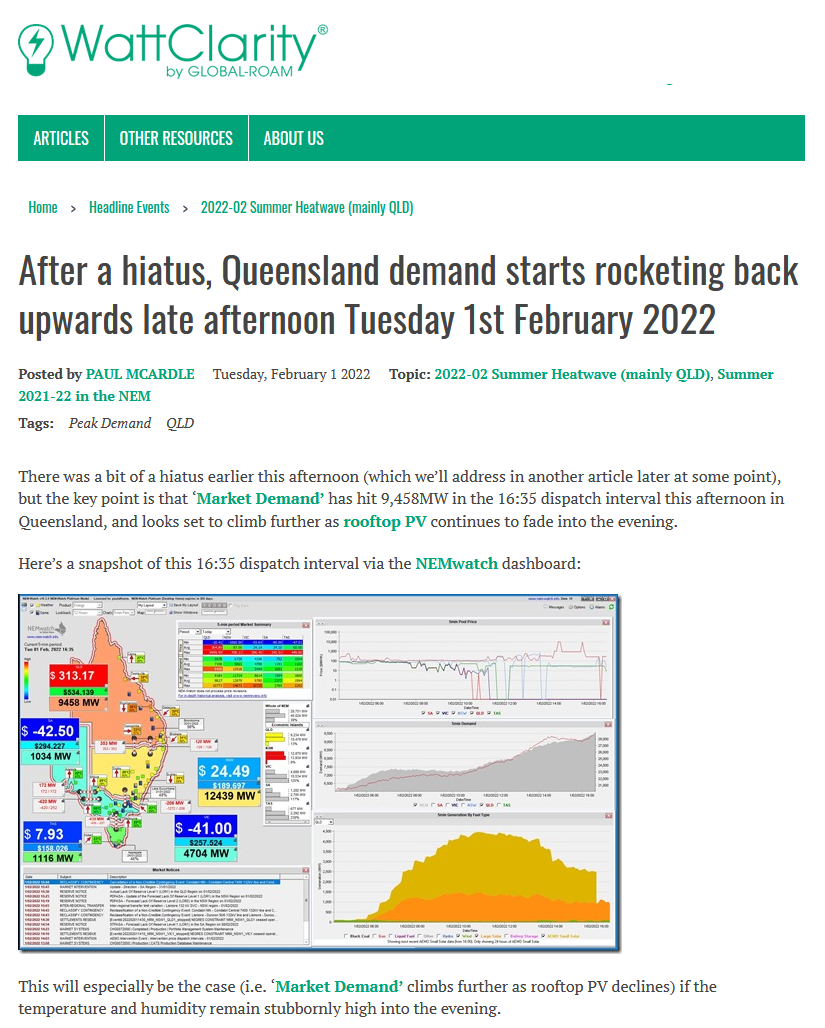 Behind the scenes, we’ve been working on an upgrade to the NEMwatchTM application for some time (you might have seen some early snapshots in articles like these on WattClarity®). On Monday 27th September 2021, we released v10.2 of NEMwatch and made it publicly accessible for licensed users. With the market’s looming shift to Five Minute…

Earlier today, the Sydney Morning Herald published a live feed of updates on the heat wave affecting the east coast of the country. As part of their coverage they posted a screenshot of our Live Electricity Consumption widget (sponsored by the ECA) from around 12:40pm which was used to illustrate temperatures around Australia and their…

After yesterday’s announcement of the planned closure of Victoria’s Hazelwood Power Station by the end of March 2017, many stories have been published on the impacts for the industry. The Australian newspaper published a whole page spread about the story on page two of their daily edition this morning. Included was a snapshot from the…

One of our team members was surprised, last night (i.e. Friday 3rd June 2016) to see an old image of an old version of NEM-Watch (from way back in 2007) used to illustrate how Tasmania would normally be interconnected to the mainland by the sub-sea HVDC (high-voltage direct current) link connecting into the Latrobe Valley in Victoria….

“I am impressed by your almost live data graph of NEM data for Australia.  Coming from South Australia (and a rooftop PV early adoptor) I am interested in how our wind and solar are contributing over the day.”

“Love the live feed generation data link. It’s very interesting to see how things change through the course of the day and week. … Cheers and keep up the great work”

“For me, this little bar graph on RenewEconomy is essential viewing.  I look forward to seeing the various current real-time generation sources, and keep hoping for the wind to blow and sun to shine 24 hours each day.  Much more accurate than looking out my window at Hazelwood power station, and prettier too.”

“I have today discovered your online widget whilst doing some fact finding about the situation here in Tasmania and was thrilled to see the live data from our power generation sources, thank you! Thanks again for such a great tool, it’s very interesting to hear about our little states predicament and to be able to source this info in such an easy to view way is great.”