Behind the scenes, we’ve been working on an upgrade to the NEMwatchTM application for some time (you might have seen some early snapshots in articles like these on WattClarity®).

On Monday 27th September 2021, we released v10.2 of NEMwatch and made it publicly accessible for licensed users. With the market’s looming shift to Five Minute Settlement (5MS) on 1st October 2021, this gave us the spur to update the software for a couple of different reasons … including some related to 5MS.

The ‘Downloads’ page on the NEMwatch v10 portal here will link you to the latest installer.

(B)  What are some of the things that have changed with NEMwatch v10.2?

Below we have outlined some of the changes that occur in this release.

Prior to 5MS, the NEM was settled over 30-minute ‘trading intervals’ and dispatched over 5-minute ‘dispatch intervals’.

The major change that results from the market’s move to 5MS, is that much of the trading/settlement data (e.g. trading price, etc.) that was previously applicable to 30-minute periods, will now apply to 5-minute periods…. notwithstanding challenges such as Tripwire #1.

We have made several updates to the user interface of the software in an attempt to reduce any ambiguity that would otherwise remain after this change:

(a)  Labels and references that were previously ‘Dispatch Interval’, have been updated to ‘5-Min Period’.

(b)  Some data contained in the charts will still be relevant for 30 minute periods, hence to reduce confusion in these instances we have changed labels and references from ‘Trading Interval’ to ’30-Min Period’.

Note that the ’30-min period’ chart will show the new 5-minute trading data historically … but what is essentially 30-minute cadence ‘P30 predispatch’ data in the forecast horizon due to Tripwire #1.

In order to improve performance and simplify the interface, we have removed several non-essential features from the software. Some features that have been removed include:

(a)  Removal of what was the ‘Trading Map’, hence map will now default to what was previously known as ‘Dispatch Map’ (i.e. 5-min interval map). Only one map is required under a 5MS environment.

(b)  Removal of WEPI charts and data. Wholesale Electricity Price Index data was previously published by ASX Energy but was discontinued at some point in the past.  For those who wish to have access to ASX Energy price data on an ‘end-of-day’ basis, then:

i.  Our NEMFuturesUpdater provides a basic feed; and

ii.  The data is included historically in NEMreview v7.

(c)  Removal of Twitter integration. The ability to tweet a screenshot of NEMwatch has been removed, as we found this feature was seldom used by NEMwatch users.

(B3)  Shifting to use AEMO data for Small Solar

In previous versions of NEMwatch, the small solar data displayed throughout the software (such as the ‘5min Generation by Fuel Type’ chart), was sourced from an estimate from the APVI.

(a)  The APVI data feed was added into NEMwatch v10 (and also the popular NEMwatch widget, which we have provided with the sponsorship of RenewEconomy) late in 2014 – at that point, the APVI was the only source of estimates for the contribution of rooftop PV in NEM Regions.

(b) Live energy data went national with the popular NEMwatch widget in July 2015.

(c)  From mid-2016 the AEMO introduced its own estimates … which led to the WattClarity article about ‘The opacity of distributed, small-scale solar PV’ as we grappled with the differences between the two estimates.  We updated the analysis (spurred on by our GRC2018 efforts) in ‘The (ongoing!) opacity of distributed, small-scale solar PV output’ on 2nd December 2019.

i.  This installed copy of NEMwatch will switch to using the AEMO’s estimates, in order that we are using a single data provider for what is happening physically in the electricity supply grid.

ii.  Because the NEMwatch widget also provides visibility of WA (or, more accurately, the dominant SWIS grid in the south-west corner of WA) and as we have not found an equivalent AEMO estimate of rooftop solar for the SWIS grid, we will continue using the APVI estimates for all regions.

1)  Hence there will be a difference between the two sources!

2)  Also note we have commenced the process of switching to a different source (at APVI) of the APVI estimate as well, which will be added into the NEMwatch widget when it is ready.  That’s part of the project we have commenced to upgrade that widget.

Previously you were only able to view 24 hours worth of small solar data, but the switch in the data source removes this limitation. 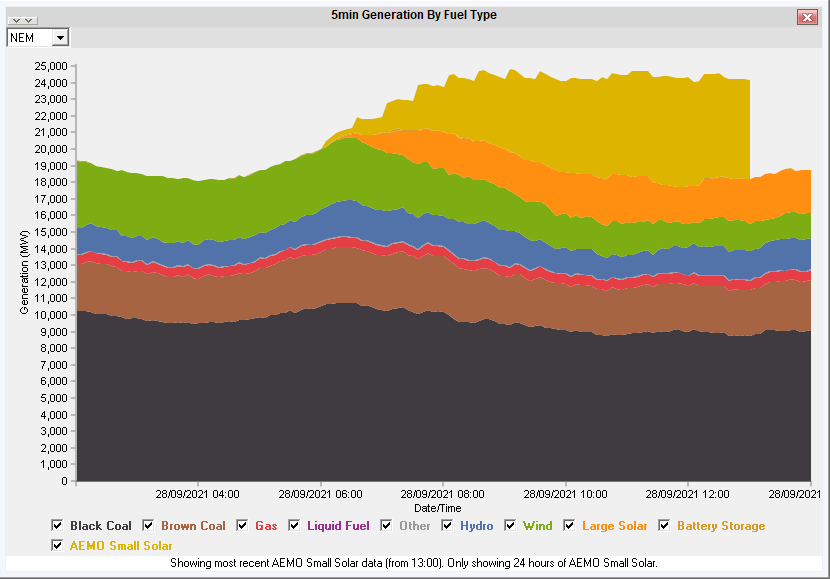 Note: these AEMO estimates for rooftop PV have a few quirks that you should understand:

(a)  Firstly, the data is updated only every 30 minutes (and we are not aware of any plans at AEMO to change this to 5 minute cadence with the move to 5MS) … because the other generation by fuel type data is published every 5 minutes, there will be a difference in the display on the charts.

(b)  Also, there is a slight delay in how the AEMO publishes this data (because it is an estimate) compared to the other fuel type data (which are generator SCADA meter readings used in dispatch of the market.

We believe the data will be useful – even with the quirks!

(C)  A couple other points

Whilst we have your attention, it’s worth highlighting a couple other points about the NEMwatch software, including where it is headed…

(C1)  Who is NEMwatch intended to serve?

Can you believe it – NEMwatch v1 was released way back in 2000 (not too long after the commencement of the NEM)!

Back at that time it was (we believe) the only commercially available and intuitive dashboard-style display to NEM operations … and customers loved it!

Over the 20+ years that we (i.e. Global-Roam Pty Ltd) have been serving clients since that time, there have been a large number of points of evolution – but these principally boil down into two baskets:

(a)  EXTERNALLY, the market has been through a lot of changes (with 5MS a big imminent one):

i.  That’s meant that the needs of our growing client base is continuing to evolve.

ii.  This pace of change looks set to accelerate in future … especially of even half of the ESB’s Final Advice to Energy Ministers is implemented in some way.!

(b)  INTERNALLY, and partly in response to these external changes, we have progressively developed two other (deeper-level) dashboard-style products:

i.  Our deSide ® product is designed for spot-exposed energy users; and

ii.  Our ez2view product, which is intended for those with significant exposure to what’s happening in the NEM.

… it has been these two other products that have been capturing the majority of our development efforts for a decade or more (and that’s been a deliberate choice, given the needs that they serve).

Given the growing number of clients who have upgraded to deSide® or ez2view over the past decade or more, we have been increasingly thinking of NEMwatch as an ‘entry-level dashboard’ … and indeed that is how we’ve described it in many recent articles on WattClarity where we have used NEMwatch snapshots.

(a)  For a start, we intended it to mean ‘entry level’ in a commercial sense … i.e. it’s a low-cost dashboard style display that starts at only AUD$1,000exGST p.a. and provides a good overview of a basic data set about what is happening now in the NEM

… the intention here is that clients upgrade to deSide® or ez2view as their needs evolve.

(b)  But also it’s apparent to us that ‘entry level’ also means in the literal sense … as in some clients continue to use NEMwatch in their foyer (e.g. at their reception desk), or in their Lunch Room, in order to help provide some broad context to the broader organisation (and their visitors) about the industry in which they work.

We still find a broad range of clients who use NEMwatch in this way….

(C3)  Where is NEMwatch headed?

… which means we are also thinking about where NEMwatch is headed.

As noted here on this related site, for some time we have had ideas sketched out for what a revamped ‘NEMwatch v11’ could be, reflecting the above.

These ideas really intrigue us … but they have been parked for a while given other priorities.  If you know of people who can help us (i.e. give us more bandwidth to pursue this) please let us know?